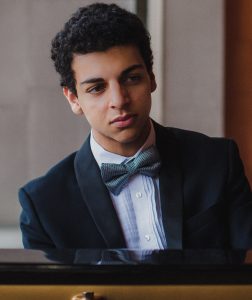 From the Top’s Alumni Leadership Grant, generously funded by the Howard and Geraldine Polinger Family Foundation, seeks to support alumni of From the Top who have created projects that use music and the arts to impact their local communities.

Pianist Amir Siraj was awarded the Alumni Leadership Grant in 2019 for his project to advocate for the preservation of the National Parks through musical performance. He worked with three composers: Benjamin Bromley Nuzzo, Benjamin P. Wenzelberg, and Alexander “Sasha” Yakub (both FTT alumni) to commission pieces that would highlight the importance of the Parks.

Here Amir reflects on the process and reveals the music videos created for this cause.

Inspired by the legendary Frederick Law Olmsted, and formalized by the Organic Act of 1916, the founding of the National Park Service was a milestone, pioneering conservation and preservation efforts at a time when these ideas weren’t even on the public’s horizon. Over the next century, the National Parks Service would help preserve wildlife diversity, endangered species, sacred Native American lands, and natural wonders across North America.

Unfortunately, many of the gains achieved by the National Parks Service are under siege.

Short-sighted public policy pushes to undo many of the regulations that protect our country’s National Parks. Climate change poses an existential threat to America’s wilderness. Sacred lands and essential habitats are at risk, along with an ecosystem vital in delivering clean air and water to millions of Americans, and national treasures that have inspired generations of Americans and visitors.

I thought back to the many times I worked with From the Top to take music out of the concert hall and to the front lines—empowering elderly communities, telling immigrant stories, or raising funds for the hungry. In these experiences, I learned I could use my art as advocacy.

Now I wanted to advocate for the protection of the Parks. I applied and was very humbled to be awarded the Alumni Leadership Grant, which would allow me to realize this vision.

The past year has been a true whirlwind. I had the great privilege of working with three of my very dearest colleagues; Benjamin Bromley Nuzzo, Benjamin P. Wenzelberg, and Alexander “Sasha” Yakub. Each brought a unique and extraordinary compositional perspective on using music to advocate for the Parks.

We nearly had an on-site shoot at Pinnacles National Park in California (Steinway had graciously offered to move a piano to the middle of a national park!), but unfortunately, filming permit logistics fell through just days before we were scheduled to film. As a result, we had to pivot to an off-site production plan, but between the recording capabilities of the New England Conservatory of Music, the exceptional footage of key Parks shot by Matt Coakley, and the directing prowess of Nathan Lee, the project quickly found its footing. The new plan allowed us to focus on three specific Parks, each facing unique challenges: Death Valley, Glacier, and Pinnacles. The process of the videos coming together was nothing short of magical.

And I couldn’t be more excited to be sharing these videos with the world, in support of the National Parks Foundation. I hope you enjoy and are inclined to support the preservation of our national treasures.

Learn more about “Music for the Parks” on Facebook.