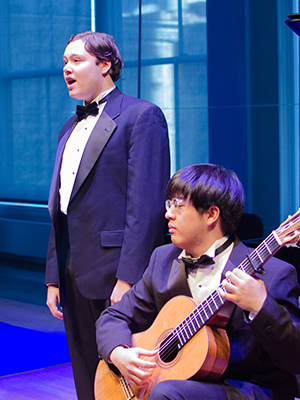 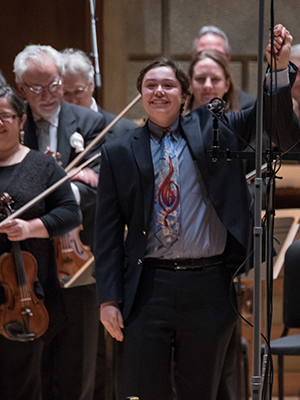 Benjy was named a 2017 U.S. Presidential Scholar in the Arts! Read here for more information.

Benjamin Wenzelberg (voice), 17, is from Tenafly, New Jersey and has appeared onstage as a singer, composer, conductor, and pianist. He has performed as soloist and chorister with the Metropolitan Opera for eight seasons, and as a soloist with such companies/venues as New York City Opera, Atlanta Opera, the NY Philharmonic, Shakespeare in the Park, Carnegie Hall, and Alice Tully Hall. Benjy studies composition with Dr. Eric Ewazen at the Juilliard School Pre-College Division. Hearing his BMI award-winning composition performed on From the Top with host Christopher O’Riley by the Rochester Philharmonic Orchestra was a memorable musical experience. He made his European composition and conducting debut with another orchestral composition at the Grafenegg Festival in Austria; the piece won first prize and will be reprised by the Tonkünstler Orchestra at Vienna Musikverein’s Golden Hall. The opera he composed for family audiences, “The Sleeping Beauty,” won an ASCAP Morton Gould Young Composer Award and their Charlotte V. Bergen Scholarship. He is a proud National Merit Scholarship Winner and a US Presidential Scholar in the Arts. Benjy loves to travel and experience foreign languages and cultures.