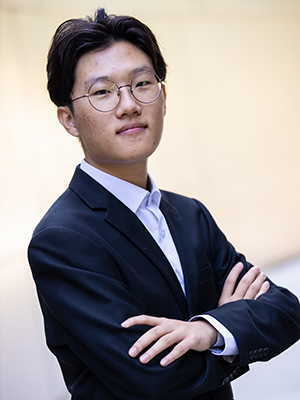 William Jae (composer), 18, is a native of Los Angeles, California, where he is a senior at Downtown Magnets High School. He is a recipient of From the Top’s Jack Kent Cooke Young Artist Award. He fell in love with the piano when he was 11 and has studied music at the Colburn School since 2013, learning the bassoon. In 2018, William received the Herbert Zipper Scholarship at the Colburn School, allowing him to study music composition with Jordan Nelson, piano with Inga Kapouler-Gartner, and music theory with Kathy Sawada. He has been a fellow in the Los Angeles Philharmonic’s Nancy and Barry Sanders Composer Fellowship Program since 2019. He has participated in the Idyllwild Piano Intensive and HSCI at Boston Conservatory at Berklee, where his first string quartet was premiered. Currently, he also participates in the Ed and Mari Edelman Chamber Music Institute with John Walz and Young Artists of Los Angeles with Daniel Suk. In 2018, he founded the first music club at his high school. William also likes to study history and improvise on the piano. He is very excited to be recently accepted to the Eastman School of Music for the fall.

William’s appearance on From the Top is made possible with support from the The ASCAP Foundation Irving Caesar Fund.

About the Composition of Alabaster Wool:

“This was my first project at the LA Phil’s Nancy and Barry Sanders Composer Fellowship Program. I took inspiration from Emily Dickinson’s poem titled “It sifts from Leaden Sieves”. In particular, I was intrigued with the phrase “alabaster wool”, which was the metaphor she used when referencing snow. But instead of writing in a distinct classical style, I took a more progressive and experimental approach for this one. I wanted to experiment with extended techniques, atonality, and other ideas and coalesce them together into this piece.”

“It sifts from Leaden Sieves” by Emily Dickinson:

It sifts from Leaden Sieves –
It powders all the Wood.
It fills with Alabaster Wool
The Wrinkles of the Road –
It makes an even Face Of Mountain, and of Plain
Unbroken Forehead from the East Unto the East again
It reaches to the Fence
It wraps it Rail by Rail Till it is lost in Fleeces
It deals Celestial Vail To Stump, and Stack and Stem
A Summer’s empty Room
Acres of Joints, where Harvests were,
Recordless, but for them
It Ruffles Wrists of Posts As Ankles of a Queen
Then stills it’s Artisans
– like Ghosts – Denying they have been

From the Top · 4 - William Jae
Learn
Our Partners
DONATE NOW