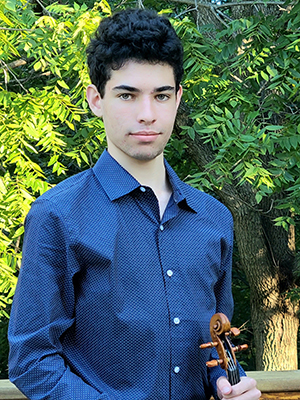 Vladimir Tsiper (violin), 15, is from Eagan, Minnesota and is in tenth grade at the Breck School in Minneapolis, Minnesota. He has been studying violin with Lucinda Marvin at the MacPhail Center for Music since the age of five and with Yulia Ziskel of the New York Philharmonic for the last two years. In addition, he has been studying composition with Sarah Miller at MacPhail. He is a member of the MYS Symphony Orchestra and Artaria Chamber Music School. Vladimir has won many prizes at venues such as the Schubert Club, Mary West Solo Competition, Thursday Musical, the Golden Valley Concerto Competition, the MacPhail Concerto/Aria Competition, Minnesota Sinfonia Young Artists Competition, Dakota Valley Symphony, and the Young People’s Symphony Concert Association of Minnesota Orchestra Competition. This year Vladimir won first prize at the Minnesota Music Teachers Association Composition Contest and third prize at the Sherer International Violin Competition. His most recent major orchestra appearances were with the Bloomington Symphony Orchestra, Dakota Valley Symphony Orchestra and Civic Orchestra of Minneapolis. At his school Vladimir leads Breck Chamber Players ensemble. Aside from music, Vladimir enjoys downhill skiing, theater, and traveling, especially visiting the tallest buildings in the world. He is a movie nerd and an active member of the film lovers’ community.