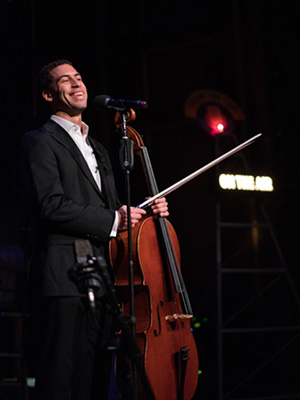 Cellist Tony Rymer, a native of Dorchester, Massachusetts and a 2007 graduate of Walnut Hill School for the Arts, was one of the first recipients of From the Top’s Jack Kent Cooke Young Artist Award. He has performed major concerti to critical acclaim with the Atlanta Symphony, Boston Pops, Cleveland Orchestra, Detroit Symphony, and Pittsburgh Symphony, among others. He was the Second Prize Winner in the Enescu Competition, took 3rd place in the Stulberg International String Competition, and won first prize in the Washington International Competition and the Sphinx Competition Senior Division. He has also been heard as soloist on WGBH Boston, WCLV Cleveland, and NPR’s Performance Today. An avid chamber musician, Tony has collaborated in concert with artists such as Itzhak Perlman, Midori, Ani Kavafian, Miriam Fried, Kim Kashkashian, Paul Katz, Martin Helmchen, and Dénes Várjon. Tony worked privately with Yo-Yo Ma and performed in master classes for Anner Bylsma, Gary Hoffman, Steven Isserlis, and Pieter Wispelwey.  He completed his BM and MM at the New England Conservatory where he studied with Paul Katz and Laurence Lesser while holding the Laurence Lesser Presidential Scholarship. Tony then received a Masters of Music, with highest marks, as student of Frans Helmerson at the Hanns Eisler Hochschule für Musik. Tony began playing cello at age five, was a Project STEP scholarship student from 1996-2007, and was awarded the prestigious Kravitz scholarship in 2007.

Tony plays on a cello made by Jean-Baptiste Vuillaume on loan from the Deutsche Stiftung Musikleben.