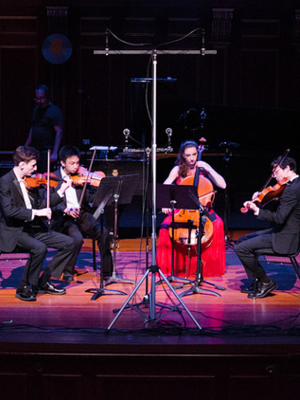 “Kairos”, the decisive time for opportunity and action, captures the essence of ambition and boldness found in these four young artists. Kairos was formed in September of 2017 when all four students were scholarship recipient Fellows at the Music Institute of Chicago Academy, a pre-college training program for gifted musicians. Kairos Quartet won the Gold Medal in the Junior Division of the 2018 Fischoff National Chamber Competition and First Prize in the Junior String Division of the 2018 M-Prize International Chamber Arts Competition, making Kairos the first chamber group to win the top prizes at both Fischoff and M-Prize in the same year.

They were also awarded the Grand Prize at the A.N. and Pearl G. Barnett Chamber Music Competition, First Place at the Rembrandt Chamber Players Competition, and the Silver Medal at the St. Paul String Quartet Competition. Named the Rembrandt Young Artists for 2018, Kairos was featured on a live broadcast of WFMT’s Introductions. All four members are currently pursuing music performance in college; Joshua, Julian, and Thompson are students at the New England Conservatory while Lydia is studying at the Cleveland Institute of Music.

Listen to The Kairos Quartet

More on The Kairos Quartet