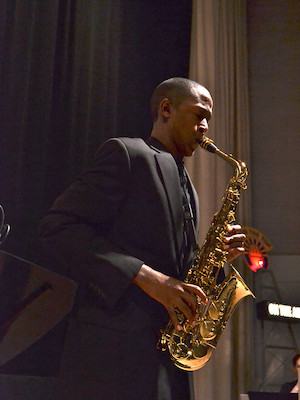 Recognized for his “glowing mahogany tone” (Seen and Heard International) and “breathtaking” (Classical Voice of NC) performances, American classical saxophonist Steven Banks “is at the forefront of musicians of his generation in his display of the highest level of both artistry and pedagogy.” (Taimur Sullivan, Professor of Saxophone, Northwestern University)

Mr. Banks has an ongoing relationship with The Cleveland Orchestra, having performed with the legendary ensemble in Severance Hall, Carnegie Hall, and at the Blossom Music Center. He has worked with notable conductors including Franz Welser-Most, Jahja Ling, Matthias Pintscher, Alain Altinoglu, Roderick Cox, among others. This season, Mr. Banks is particularly excited to travel to Abu Dhabi with the orchestra to perform a production of Sergei Prokofiev’s Romeo and Juliet, Op. 64, with the American Ballet Theatre.

Banks is the baritone saxophonist of the award-winning Kenari Quartet. The Kenari Quartet has found a home performing on many of the premiere chamber music series in the United States. Recent engagements include appearances at Chamber Music Northwest, the Grand Teton Music Festival, and Chamber Music Tulsa, among others. For many chamber music institutions, the Kenari Quartet has been proud to serve as the first saxophone quartet to be presented. The group has earned top prizes at 7 national and international chamber music competitions. Their debut album, French Saxophone Quartets, was released in December 2016 under the Naxos Records label. Kenari is represented by Jean Schreiber Management.

Banks is an advocate for diversity and inclusion in music education, performance, and newly commissioned works in the classical realm. He gave a talk at the TEDxNorthwesternU 2017 conference with ideas about how to create change in institutionalized prejudices against women and people of color. Since the talk, Banks has written an article for WQXR and given guest lectures on the history of black classical composers. Banks serves as a member of the first Committee on the Status of Women for the North American Saxophone Alliance, and is proud to have been selected as a member of the jury for the first Female Saxophonist Competition.

As a jazz saxophonist and multi-instrumentalist, Banks has performed alongside members and former members of the Jazz at Lincoln Center Orchestra, Buddy Rich Big Band, Vanguard Jazz Orchestra, among others. He has played on professionally-released recordings, including Michael Spiro and Wayne Wallace’s album, Canto America, which was nominated for a 2017 GRAMMY award.

Banks serves proudly as Assistant Professor of Saxophone at Ithaca College. He previously served on faculty at the Baldwin Wallace Conservatory. He has a Master of Music degree from the Northwestern University Bienen School of Music in Saxophone Performance and a Bachelor of Arts degree in Saxophone Performance with a minor in Jazz Studies from the Indiana University Jacobs School of Music. His primary saxophone teachers have been Taimur Sullivan, Otis Murphy, Jr., and Galvin Crisp.

From the Top · Steven Banks, Saxophone