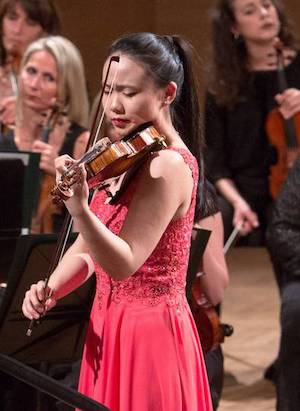 The recipient of a 2020 Avery Fisher Career Grant and 2020 Lincoln Center Emerging Artist Award, American violinist Stella Chen is the winner of the International Queen Elisabeth Grand Prize – Queen Mathilde Prize in the 2019 Queen Elisabeth International Violin Competition. Stella has been lauded for her “phenomenal maturity” and “fresh and spontaneous, yet emotionally profound and intellectually well-structured performance” (The Jerusalem Post).

In the upcoming season, Stella will make her debut with the Chicago Symphony and her New York City concerto debut in the U.S. premiere of Jorg Widmann’s Concerto No. 2, conducted by the composer. Last season, she appeared with numerous orchestras including the Belgian National Orchestra, Brussels Philharmonic, Luxembourg Philharmonia, and Harvard-Radcliffe Orchestra. She also gave debut performances at the Ravinia and Kronberg Academy Festivals as well as at the Salzburg Mozarteum. In past seasons, Stella appeared with orchestras including the Lausanne Chamber Orchestra, Orchestre Royal de Chambre de Wallonie, Orquestra Filarmónica de Medellín, London Chamber Orchestra, and Welsh National Symphony Orchestra, among others.

Stella is also the first recipient of the Robert Levin Award from Harvard University, the top prize winner of the Tibor Varga International Violin Competition and youngest ever prize winner of the Menuhin Competition. She has given solo performances at venues such as the Kennedy Center, Metropolitan Museum of Art, and on the Dame Myra Hess Memorial Concert Series in Chicago. Other noteworthy ventures include performances in Bhutan, Jordan, Israel, Cuba, and Colombia. She has appeared at chamber music festivals including the Perlman Music Program, Music@Menlo, the Sarasota Music Festival, and YellowBarn. Stella has collaborated with such notable artists as Itzhak Perlman, Robert Levin, Gábor Takács-Nagy, Matthew Lipman, and the Silk Road Ensemble.

A graduate of the Harvard/New England Conservatory Dual Degree Program, Stella received a Bachelor of Arts in psychology with honors from Harvard University and an MM from NEC. Currently, Stella is a C.V. Starr doctoral candidate at the Juilliard School and a professional studies candidate at Kronberg Academy. Teachers and mentors include Li Lin, Mihaela Martin, Donald Weilerstein, Itzhak Perlman, and Miriam Fried. Stella is a member of the Bowers Program (formerly CMS Two) at the Chamber Music Society of Lincoln Center She plays the ‘Huggins’ 1708 Stradivarius violin, generously on loan from the Nippon Music Foundation.

From the Top · Stella Chen