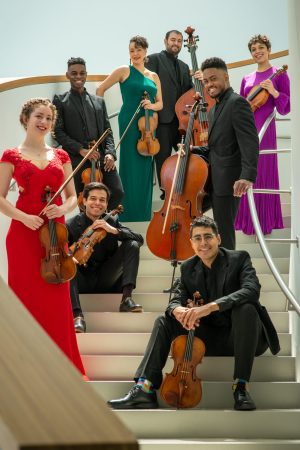 The Sphinx Virtuosi appears on Show 418/A Celebration of Sphinx.

The Sphinx Virtuosi is a dynamic and inspiring professional self-conducted chamber orchestra and serves as the flagship performing entity of the Sphinx Organization – the leading social justice non-profit dedicated to transforming lives through the power of diversity in the arts. Comprised of eighteen accomplished Black and Latinx artists, a critical aim of the Sphinx Virtuosi is to evolve and transform the face of classical music through artistic excellence, pioneering programming, and impassioned community engagement. Its members serve as cultural and diversity ambassadors for audiences and communities around the United States during national tours.

Since 2004, the Sphinx Virtuosi’s concerts have been presented by the leading arts organizations, including annual return visits to Carnegie Hall where it is an established highlight of the fall season. Frequently selling out venues, the ensemble has garnered effusive accolades including from The New York Times that has described the group as “…top-notch…more essential at this moment than ever…a vibrant, assured performance…”; and The Washington Post that wrote “true to their name, the Sphinx Virtuosi call up the vision of an iconic mythological feline with its immeasurable power, unwavering command, and soulful beauty.”

Members of the Sphinx Virtuosi have performed as soloists with major American orchestras, including the New York Philharmonic and the Cleveland, Detroit, Atlanta, Philadelphia, Seattle, and Pittsburgh Symphony Orchestras. Members also hold professional orchestral and academic positions. The Sphinx Virtuosi’s community engagement initiatives regularly extend beyond masterclasses and workshops to members leading DEI initiatives within arts organizations and connecting with other Sphinx programming to further the mission of achieving excellence through diversity. As a bilingual ensemble, these artist-citizens frequently break down existing barriers empowering the artform to connect with the broader community. During the pandemic in 2020/21 the ensemble found creative ways to connect with audiences and communities virtually through performances, panel discussions, masterclasses, Q&A sessions, and more reaching over 30,000 people across 20 organizations.

The Sphinx Virtuosi has collaborated with major artists such as Terence Blanchard, Denyce Graves, Sweet Honey in the Rock, Damien Sneed, Will Liverman, J’Nai Bridges, and Davóne Tines, among others. Outside of the classical realm, its musicians have also worked with leading international artists such as Beyoncé and Jay-Z, and made high profile appearances including on The Tonight Show Starring Jimmy Fallon and the broadcast of the 2022 Grammy Awards. In October 2022, the ensemble will make its international debut at the Sala São Paulo in Brazil.

Sphinx Virtuosi Tours are made possible through the support of Robert F. Smith, JPMorgan Chase, and National Endowment for the Arts.

From the Top · Sphinx Virtuosi Perform & Afa Dworkin is interviewed

From the Top · Bill Neri is interviewed & Sphinx Virtuosi Perform

From the Top · Sphinx Overture