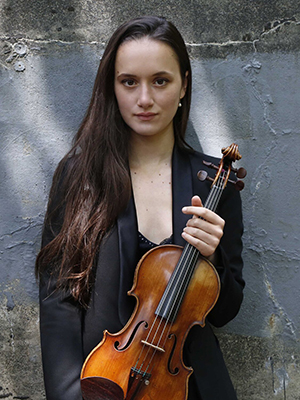 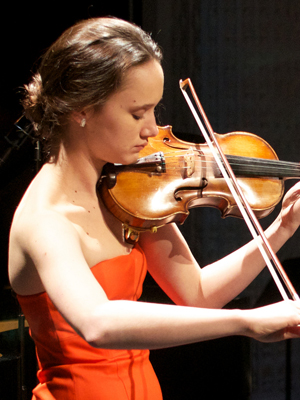 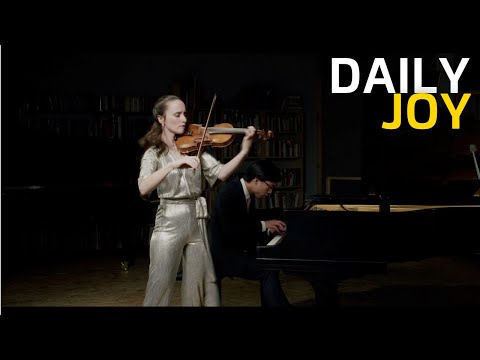 Sophia appears on From the Top’s Where Are They Now? program in 2022.

Violinist Sophia Stoyanovich has captivated audiences since her premiere at age ten with the Bremerton Symphony. She has soloed with numerous orchestras including the Seattle Symphony, and has performed across North America, Europe, Russia, China, and Vietnam.

An avid chamber musician, Sophia serves as Communications Director and violinist of The Versoi Ensemble. She performs with the New York Chamber Orchestra, Symphony in C, and APEX Ensemble. She is a chamber mentor for Midori & Friends and The Orchestra of St. Luke’s Outreach Program. Sophia also serves as an Arts Advocate & Global Community Leader on the Si-Yo Artist Society Roster, and Artist Lecturer for the Bailu Music Concert Series.

Last spring Sophia co-hosted the release of the podcast American Stories. A collaboration with pianist Derek Wang, American Stories examines and celebrates American identity through music in performance, illuminated by personal histories and reflections from featured guests of all walks of life.

Sophia holds Bachelor and Master of Music degrees from The Juilliard School as recipient of the Irene Diamond Graduate Fellowship and the Drs. & Kassie Biros Neuman Scholarship. She has studied under the tutelage of Li Lin, Mark Steinberg, and Sylvia Rosenberg. Sophia teaches out of her private studio in New York City. She performs on a 1930 Berger Violin made in New York.

Sophia Stoyanovich (violin), 18, hails from Bainbridge Island, Washington and attends Bainbridge High School. She studies violin with Ronald Patterson. She attended the Indiana University String Academy in 2008 and the Interlochen Arts Academy in 2007. Sophia is the concertmaster of the Seattle Youth Symphony, and she has performed as a soloist with the Seattle Symphony. Outside of music, Sophia enjoys baking her specialty, holiday pumpkin spice cake.

Where Are They Now?
Road Movies, Mvt 1 “Relaxed Groove” by John Adams with pianist Derek Wang

From the Top · Pianist Derek Wang and Violinist Sophia Stoyanovich