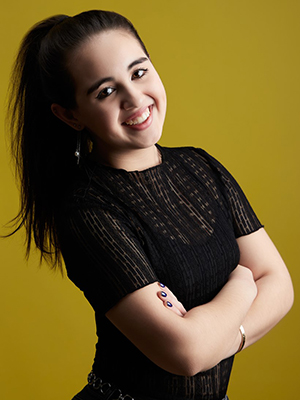 Sophia Molina (violin), 19, hails from Coral Gables, Florida. She started her musical journey at the age of 4 when she first saw a youth orchestra, and the violin captured her attention to the point of becoming the biggest interest in her life.

With a growing passion for music, she managed to rapidly advance in her studies. At age 6, she joined the Greater Miami Youth Symphony, which became an integral part of her music education. In addition to having performed multiple times as a soloist, Sophia has won many competitions at a local and national level, including the GMYS Concert and Symphony Concerto Competitions, New World School of the Arts Concerto Competitions, Florida State Music Teachers’ Association (FSMTA), Florida winner in the Music Teachers’ National Association (MTNA), American Protégé International Concerto Competition where she had the opportunity to perform at Carnegie Hall, Alhambra Orchestra Concerto Competition, the New World Symphony Side-by-Side Concerto Competition, and the National Young Arts Competition. In the summer of 2019, she performed again at Carnegie Hall, and other important concert halls throughout Europe such as the Royal Albert Hall, the Elbphilharmonie, and the Concertgebouw, as part of the National Youth Orchestra of the United States (NYO). She was featured in the Martha/Mary Starburst Young Artist Concert Series in 2021, and was selected to appear on the National Public Radio’s “From the Top”.

Sophia is currently in her first year of her BM at The Juilliard School studying under Hyo Kang. Previously, she studied with Charles Castleman and Miclen LaiPang. She attended high school at the New World School of the Arts where she was concertmaster of the NWSA High School Orchestra and the NWSA Camerata Ensemble and studied with Huifang Chen. She started her violin studies at the Miami Conservatory of music with Andres Trujillo, who helped develop her passion for music at a young age.

As part of her summer studies and additional programs, Sophia has attended the Charles Castleman Quartet program, the Heifetz International summer institute, LyricaFest Boston, the National Youth Orchestra (NYO) and the MyCM music festivals, where she’s had the opportunity to study and participate in Master classes with many internationally esteemed musicians including Michael Tilson Thomas, Ivan Chan, Mark Kaplan, Ilya and Olga Kaler, Elmar Oliveira, Ying Fu, Daniel Cho and Francesca dePasquale. As part of her orchestra performances, she has played under the baton of Sir Antonio Pappano, Michael Tilson Thomas, Carlos Miguel Prieto and Jose Serebrier.

In addition to her solo and orchestra performances, Sophia is passionate about chamber music and was involved in Miami Youth for Chamber Music (MyCM) for four years where she had the opportunity to perform at various community events with her quartet. She is also a founding member of the Superpower of ME, which is a local non-profit that provides instruments and music scholarships for local students. Outside of music, Sophia enjoys traveling, bullet journaling and calligraphy.