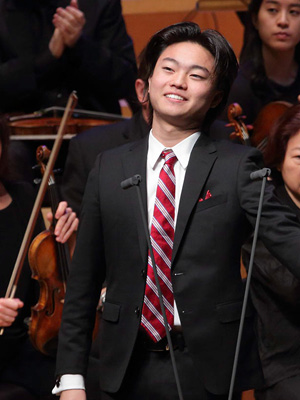 Ray appears in From the Top’s new series Where Music Lives with Kevin Olusola. Tune in to see his episode on April 18, 2019.

Ray Ushikubo (piano), 16, lives in Riverside, California. He studies piano with Ory Shihor and violin with Robert Lipsett at the Colburn Music Academy, where he is a Camille and Arnon Adar Scholar. Ray has performed on the stages of Carnegie Hall and Merkin Concert Hall in New York City and on NBC’s The Tonight Show with Jay Leno. He made his solo orchestral debut at age 10 with the Young Musicians Foundation Orchestra, and has since performed with numerous orchestras. A recipient of the prestigious Davidson Fellow Laureate Award in 2014, Ray also won the 2016 Piano Concerto Competition at the Aspen Music Festival and School, the 2017 Hilton Head International Piano Competition, the 2015 Steinway Concerto Competition, and the Young Artists Piano Prize at the 2013 Mondavi Young Artists Competition. Ray has been featured previously on From the Top, and is a past Jack Kent Cooke Young Artist Award recipient. Ray’s other interests include researching Mercedes-Benz automobiles, watching classic action movies, listening to classic heavy metal and adult contemporary, and wakeboarding.

From the Top · Ray Ushikubo, Piano

Show 354, Los Angeles, CA
I. Allegro molto moderato from the Concerto for Piano and Orchestra, Op. 16 by Edvard Grieg (1843-1907), with the Los Angeles Philharmonic Orchestra.