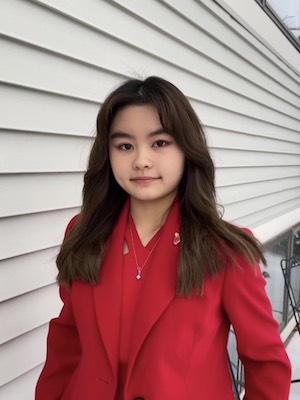 Qing Ng (violin), 17, is a senior at Memorial High School in Madison, Wisconsin. She began playing the violin when she was just eight years old and is a student of both Davis King and Almita Vamos at the Music Institute of Chicago. Qing has also been a member of Wisconsin Youth Symphony Orchestras (WYSO) for eight years.

Qing’s many musical accomplishments include earning Second Place in the Chippewa Valley Concerto Competition, as well as receiving Honorable Mention in the WYSO Philharmonia Concerto Competition, Sejong Music Competition, Milwaukee Stars of Tomorrow Competition, and the 2021 Bolz Young Artist Competition “Final Forte”, which was broadcast live on PBS Wisconsin and on Wisconsin Public Radio. Qing has had the opportunity to perform in a number of masterclasses over the years, including with violinists James Ehnes, Naha Greenholtz, Stella Chen, Rachel Barton Pine, and Danbi Um.

Receiving the Award will allow Qing to cover the cost of private lessons as well as college audition travel costs. The funds will also allow her to purchase a higher quality bow that will carry her through college and into the professional field.