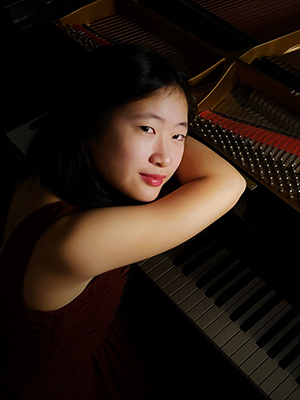 Philina Zhang (piano), 14, is from New York, New York, and in the ninth grade at Special Music School. She studies piano with Irina Morozova. Philina has won many national and international piano competitions, including the 13th International Piano Competition in memory of Vladimir Horowitz, the International Lev Vlassenko Competition, the New York State Music Teacher National Association Music Competition, the Villahermosa 16th International Festival-Competition, and the New York Solo Concert Competition. Philina has performed at Carnegie Hall, Steinway Hall, and Merkin Hall in New York City, in addition to several international concert venues. Philina is a recipient of the Chopin Foundation Scholarship. A composer as well as a pianist, Philina has composed piano solos, four-hands, violin solos, trios, and quartets, and she is also a frequent accompanist for soloists and choirs. In her spare time, she enjoys writing and performing original pieces with her sister, Nickita, who plays violin. Outside of music, Philina’s hobbies include running, swimming, karaoke, and going to museums.