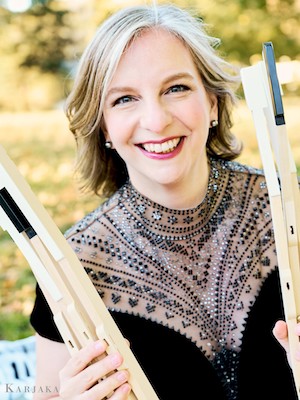 Concert Pianist Orli Shaham is a regular guest host on From the Top and has an impressive international reputation as one of today’s most gifted pianists. The New York Times called her a “brilliant pianist”, and she is admired worldwide for her interpretations of both standard and modern repertoire.

Orli Shaham released Volumes 1, 2 & 3 of the complete Mozart Sonatas on Canary Classics to rave reviews around the world: “overwhelmingly stunning” (Piano Dao), “altogether exceptional” (World Music Report) and “An absolute must for any of Mozart’s fans” (Midwest Record Review). Volumes 4, 5 and 6 are released in 2023. Her Mozart recording project also includes a concertos album with St. Louis Symphony, proclaimed “outstanding” by International Piano.

In addition to performing concertos and recitals around the world, she is on the piano and chamber music faculty at The Juilliard School. In 2022 Ms. Shaham served on the jury for Van Cliburn International Piano Competition and the Honens International Piano Competition. She is host of Orli Shaham’s Bach Yard, a live interactive concert series and interactive video series for young children designed to develop listening skills, which she founded in 2010.

Ms. Shaham is one of From the Top’s Co-Hosts and Creatives, and has hosted episodes since 2018.