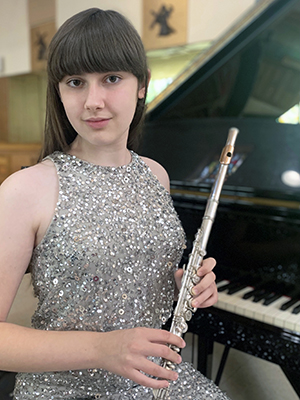 Nikka Gershman-Pepper (flute), 14, hails from Los Angeles, California and is in the eighth grade. She is honored to be the youngest ever Haynes Young Artist. She attends the Pre-Conservatory Program at the Colburn Music Academy under the mentorship of Jim Walker. Nikka discovered her love for music when she was six years old, and a year later, was was one of the youngest musicians to perform with the Emmy-winning Honor’s Orchestra at UCLA Schoenberg Music Hall Concert. Subsequently, she has been accepted as a soloist in the LA Youth Philharmonic for the 2019 Music Festival Concert at The Walt Disney Concert Hall and Colburn’s Zipper Hall. Nikka has placed first in numerous competitions, including the Vancouver Symphony Orchestra Young Artists’ Concerto Competition, Rising Stars Grand Prix (Berlin), Flutes by the Sea International Competition, Chicago Flute Club (Senior Division), the Los Angeles division of Music International Grand Prix, concerto soloist for the Whittier Regional Symphony, International Music Competition Bonn “Grand Prize Virtuoso”, and New York Young Virtuoso Competition. She has also participated in numerous masterclasses with distinguished artists, and in 2021, was named an ambassador to Music to Save Humanity Mentorship and Outreach Program. Nikka’s solo concerts include performances at the Beethoven House, Bonn, Germany, VOS with the LA Jewish Symphony premiering her original composition, New York at the Salon de Virtuosi winter concert, Skyview Concert Hall with the Vancouver Symphony Orchestra, and Théâtre Raymond Kabbaz with the Los Angeles Virtuosi Orchestra. When she is not concentrating on music, Nikka enjoy filmmaking, photography, geography, creative writing, and tennis.