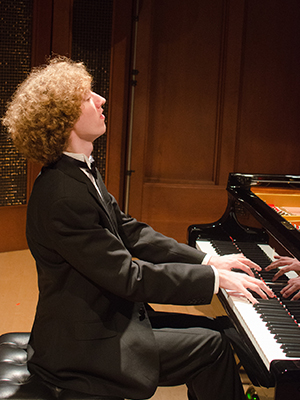 In 2015, Michael will begin his studies at the Curtis Institute of Music!

Michael Davidman (piano), 20, is from New York, New York and studies with Robert McDonald at the Curtis Institute of Music. He first appeared on From the Top when he was 13. Michael also enjoys accompanying opera singers.

Michael Davidman (piano), 13, is from New York, NY. Last year, he participated in a master class with Lang Lang at the Manhattan School of Music and attended the Summit Music Festival as part of a chamber group with From the Top alum Stephan Waarts and Laura Andrade. In summer 2010, Michael attended the Academy of Music Festivals in Italy and Spain. He was a finalist this fall in From the Top and Carnegie Hall’s Big Break online contest. Outside of music, Michael enjoys watching old TV shows and scary movies.

Show 342, Santa Barbara
I. Allegro agitato, from Piano Sonata No. 2 by Sergei Rachmaninoff