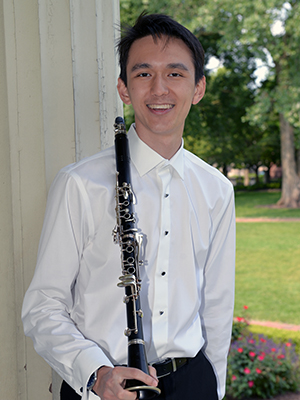 Louis Auxenfans (clarinet), 17, is from Chicago, Illinois, and is a senior at the University of Chicago Laboratory Schools. In November 2021, he made his solo orchestra debut at Symphony Center with the flagship ensemble of the Chicago Youth Symphony Orchestras (CYSO) as a result of winning their concerto competition. Louis has been a member of CYSO for seven seasons and is currently principal clarinetist of their highest ensemble, Symphony Orchestra. He was named the 2022 Northwest Symphony Orchestra’s Paul Vermel Young Artist, which made him the first woodwind player to solo with the orchestra. In addition, he was the youngest prize winner of the Crain-Maling CSO Young Artist Competition, winning its scholarship prize, and performed twice as a soloist at Carnegie Hall on two different instruments (clarinet & piano) in the same year. He has performed in master classes for Anthony McGill, Afendi Yusuf, and Stephen Williamson. Louis currently studies with Ms. Kai-Yun Lu of Boston. Besides solo and orchestral engagements, Louis is also an avid chamber musician. Alongside his violinist brother, Henry, he regularly performs in chamber concerts for his community. Recent performances have included a community concert in Navy Pier and a recital on the Midwest’s largest classical music radio station, WFMT 98.7, where he has been featured three times. Outside of music, Louis spends his time conducting economic research on education and inequality, serving as news editor of his high school newspaper, watching soccer, playing tennis, and reading.