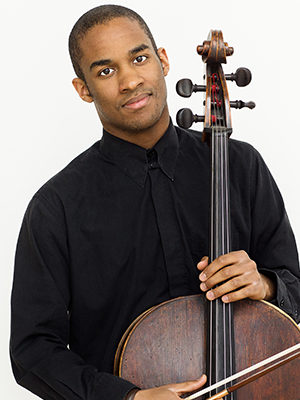 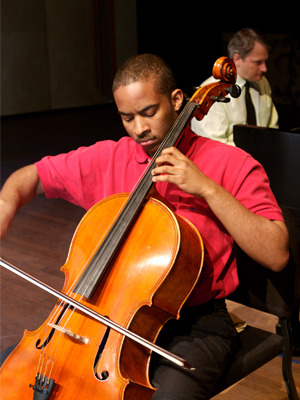 Cellist Khari Joyner received a 2017-2018 career grant from the Leonore Annenberg Fellowship for the Performing and Visual Arts. He has conducted teaching residencies and concert series in places as diverse as Shanghai, Vancouver, The Netherlands, and across the United States. Recently he toured Japan as a member of the Orpheus Chamber Orchestra. Further accolades include a private performance for President Barack Obama in the Oval Office, the U.S. Premiere of the late Valentin Bibik’s Cello Concerto No. 2, with the New Juilliard Ensemble. Learn more about Khari at www.kharijoyner.com.

Khari Joyner (cello), 17, is a product of the Atlanta Symphony’s Talent Development Program, which aims to open the door to opportunity and achievement at the highest level for promising young African American and Latino classical music students. A former principal cellist of the Atlanta Symphony Youth Orchestra, Khari recently won the Junior Division of the 2009 Sphinx Competition. Currently a 12th grader at Atlanta’s Lakeside High School, Khari performs with his brothers, Amyr and Jarin, in the KAJ Trio, and studies music with Martha Gerschefski of Georgia State University. In association with Sphinx, he will perform with several major orchestras while attending Juilliard in the upcoming year. The Young Artist Award will enable Khari to purchase a new cello.

From the Top · Cellist Khari Joyner

From the Top · Khari Joyner, Cello