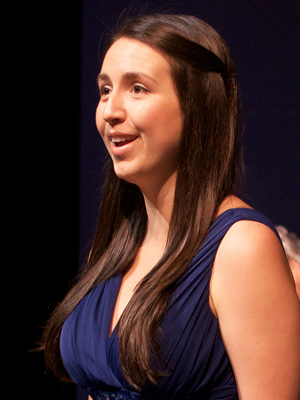 Kara Sainz Dugan first appeared on From the Top Show 211 and has also appeared on Highlight Show 27 and Show 274.

Kara Sainz (mezzo-soprano) first appeared on From the Top as a soloist in 2010. Originally from Temecula, California, she is a rising fourth year undergraduate student at The Juilliard School, where she is a recipient of the Jerome L. Greene Fellowship and a student of Edith Bers.  Kara was awarded the ASCAP foundation’s 2010 Lieber and Stoller Scholarship as well as a Grand-Prize Finalist Award in the coveted Los Angeles Music Center Spotlight Awards in 2008, for which she performed in the Dorothy Chandler Pavilion.  This summer Ms. Sainz will return to Aspen Summer Music Festival to perform the role of La Ciesca in Puccini’s Gianni Schicchi.

From the Top · Kara Sainz, Soprano