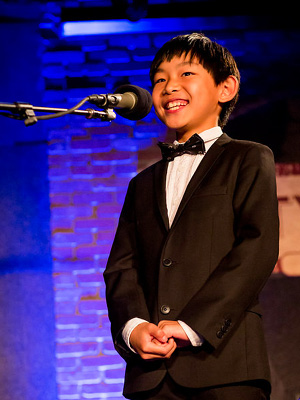 Jerry has performed with the Alton Symphony Orchestra in Illinois, the Virtuosi Brunensis Orchestra in Italy, and the Metropolitan Orchestra of St. Louis. Jerry was selected to perform on NPR’s “From the Top” program with the first appearance on show #356 in Boston and was interviewed by NPR’s “All Things Considered” emeritus host Robert Siegel. In 2020, Jerry was selected to appear multiple times on “From the Top” Daily Joy programs, and later was invited to perform a solo virtual mini-concert with the program and interviewed by host Peter Dugan.  Most recently, in June 2021,  Jerry was invited to perform on NPR’s” Tiny Desk(Home) Concert” as one of the four students in the nation. Jerry’s performances were also featured on Radio Arts Foundation-St. Louis Classic 107.3,  St. Louis Public Radio, World Piano Teachers Association USA-Missouri and WXQR New York Classic Radio Station. Jerry is selected as one of the soloists for the Back to Bach national association. He has also taken master classes from renowned musicians and attended music camps during the summers including Musicfest Perugia, e-Piano MusikFest, Chicago CIMC festival, Vivace festival and Curtis YASP.

Outside of concert halls, Jerry enjoys spreading the joy of music with the community, giving performances to friends and families, schools, culture festivals, senior living centers, and volunteers as an accompanist for local ensembles. Besides his music pursuit, he enjoys playing soccer, basketball, and tennis, competing on his math team, and making trick shot videos.

Jerry Chang (piano), 10, lives in St Louis, Missouri where he attends fourth grade at the Forsyth School. He studies piano with Zena Ilyashov at the Community Music School of Webster University. He has competed in numerous competitions and recently won third prize in the 2017 Kaufman Youth International Piano Competition, Junior Division, which culminated in a performance with the other winners at New York’s Merkin Hall. Jerry really enjoyed giving his own 45-minute piano recital for friends and family this past March. In his spare time, Jerry likes playing soccer, basketball, and tennis, competing on his math team, and playing video games.