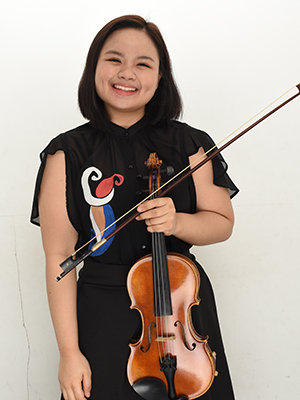 Jeanne Rafaella Ibanez Marquez (violin), 17, was born in Cavite, Philippines, and currently lives in Los Angeles, California where she attends Oak Crest Academy. She studies violin with Joan Kwuo at Colburn Music Academy, and is a recipient of the prestigious Kohl Scholarship. Jeanne began her violin studies at the age of six. In 2014, she became the youngest founding member of the Manila Symphony Junior Orchestra (MSJO) under the baton of Prof. Jeffrey Solares, and she was appointed as concertmaster in 2019. In 2017 and 2018, she joined MSJO for the 11th and 12th Summa Cum Laude International Music Festival in Vienna, Austria, where the orchestra won second and then first place, respectively, with additional concerts throughout Europe. As a soloist, Jeanne has placed in the National Music Competition for Young Artists (NAMCYA) Junior Strings Category and in the 2019 Filkor Youth Orchestra Concerto Competition. She has been a frequent soloist with MSJO and has been a featured artist with the Manila Symphony Orchestra. Outside of music, Jeanne enjoys cooking and baking.