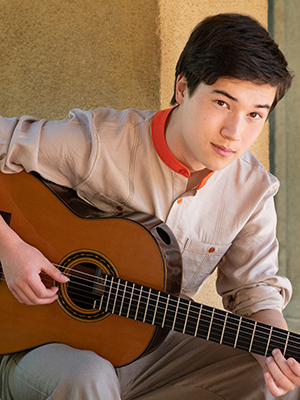 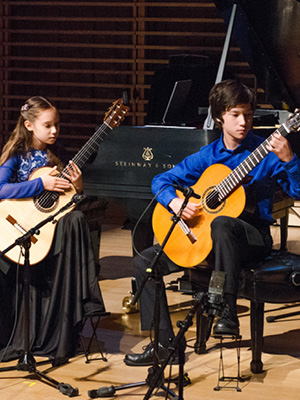 Jack performs on Show 426. He previously performed on Show 361 with his sister Elle in the Davisson Guitar Duo.

Jack Davisson (guitar), 17, hails from Palo Alto, California and is a senior at Henry M. Gunn High School. He studies guitar with Christopher Mallett at the California Conservatory of Music. Jack has won numerous prizes as a soloist and as one-half of the Davisson Guitar Duo, including first place at the 2021 Guitar Foundation of America International Youth Competition – Senior Division, 2021 James Stroud Classical Guitar Competition, 2021 Society of American Musicians Competition, and the 2021 Southern Guitar Festival Ensemble Competition. Jack is also a 2021 YoungArts Finalist. Jack has performed in masterclasses and opened concerts for such luminaries as David Russell, Andrew York, Manuel Barrueco and Kazuhito Yamashita. Jack has performed with Omni Foundation of the Arts, recorded with Guitar Salon International, and appeared on NPR Music’s Tiny Desk concert. He was featured in Classical Guitar Magazine’s Video Pick of the Week and Sunday Prodigy series. A strong believer in equal access to music and music education, Jack has also performed countless benefit concerts in schools and community centers. He founded two music programs which offer free group guitar classes – at a VA hospital and a center for under-resourced youth – and devotes much of his time to teaching there. In February 2023, Jack will release a debut album of solo and duo works called La Vida Breve, featuring pieces by Rodrigro, De Falla, Castelnuovo-Tedesco, Piazzolla and others on Frameworks/Sapphire Records. Jack is honored to be a D’Addario Artist. Outside of music, Jack is co-captain of his school’s varsity soccer team, and also enjoys visual arts and chess.