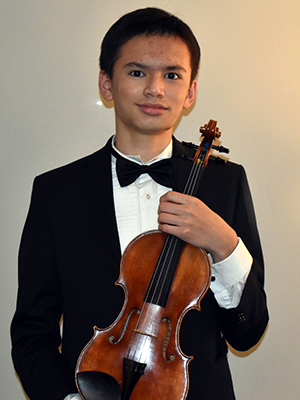 Henry Auxenfans (violin), 15, is from Chicago, Illinois and a sophomore at the University of Chicago Laboratory school. He studies violin with Frank Almond, and his chamber coaches include Larry Neuman, Qing Hou, and Hsing-Huei Huang. Henry has been honored with multiple regional, national and international prizes, including First Prize at the 2022 The President’s Own United States Marine Band Concerto Competition, NYIAA (New York International Artists Association), Lakeview Symphony Young Artist competition, and 2022 Chicago Youth Symphony Orchestra Concerto Competition. He won Second Prize at the 2020 Arthur Grumiaux Int’l Competition in Belgium. At the age of 12, Henry was the youngest prize-winner of the Chicago Symphony Orchestra Young Artist Competition. Henry was also twice the national finalist of the MTNA (Music Teachers National Association). When he was ten, Henry had his Carnegie Weill Hall debut as a result of winning First Prize of the American Protege International competition. The same year, he also had his orchestra debut with the Chicago Youth Symphony Orchestra at Northwestern University’s Pick-Staiger Hall as their 2018 concerto competition winner. For the past few seasons, Henry has served as the Concertmaster for various orchestras within CYSO and is currently the CM of their highest-level orchestra as well as their chamber orchestra. Besides orchestral and solo playing, Henry is also a passionate chamber musician. He is part of the Plymouth quintet/quartet, and University of Chicago Lab school’s Beethoven Trio. Henry has been invited to perform the national anthem solo several times with the NBA Chicago Bulls at the United Center. He was featured by WFMT with his brother, Louis, twice in 2021 and 2022. Outside of music, Henry enjoys tennis, soccer, swimming, biking, reading, writing, cooking, and learning languages.