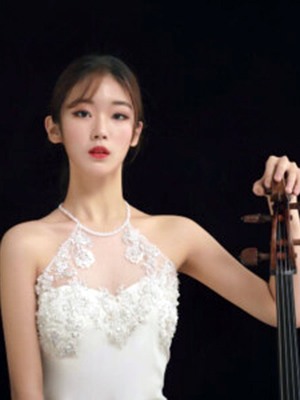 Gaeun Kim(cello), 20, was born in Seoul, South Korea, and began to play the cello at four years old. She received first and audience prizes at the Washington International Competition in 2022, both first prize and the special award in the 2012 Antonio Janigro Competition, and has won first prizes in the 2014 Liezen International Competition, and the 2015 David Popper International Cello Competition. She was selected as a “Samsung Rising Star” and one of “30 rising stars in Culture & Arts Industry on Republic of Korea.” Gaeun was the youngest participant in the 2018 Isang-Yun International Competition and the 2019 XVI Tchaikovsky International Competition. Recently she was one of six winners of the ‘Classe d’Excellence de Violoncelle’, led by cellist Gautier Capucon with whom she studies, and served as the Louis Vuitton Foundation Artist until 2021. Gaeun placed first at the Seoul Classic Music, Music & Chunchu, Little Mozart, Yewon, Youngsan Music, Sungjeong Music, Ehwa and Kyunghyang Competitions. She has played with the Zagreb Soloists, Euro-Asian Philharmonic, Suwon Symphony, Incheon Symphony, Bucheon Symphony, Seongnam Symphony, and the New World Philharmonic Orchestras. Since 2020 she has studied with Richard Aaron at the Juilliard School.