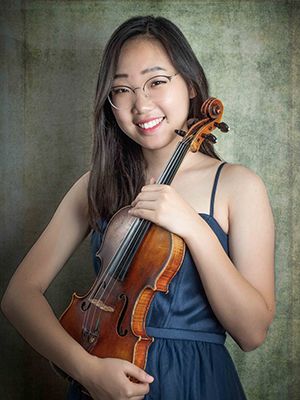 Eunice Lee (violin), 16, is a junior at Beckman High School in Irvine, California. She began her violin studies at the age of five, and has been studying with Robert Lipsett at the Colburn Music Academy since 2018. Eunice has received a number of honors in competitions and festivals. A few include first prize in the Young Stars of the Future Competition, Classics Alive National Auditions, Bellflower Symphony Concerto Competition, and first prize in the American String Teachers’ Association Regional Competition in Pomona, as well as their Los Angeles Finals. Eunice also appeared as a soloist with the Bellflower Symphony, SYMF Festival Orchestra, the Orchestra Collective of Orange County, and the South Coast Symphony. She performed in the Colburn Community School of Performing Arts’s Honors Recital in the spring of 2017 and 2018, performing in Zipper Hall.  She also performed in a masterclass for Robert McDuffie and Emanuel Borok, and received coaching from Jean Yves Thibaudet, as well as Arnold Steinhardt. As an accomplished chamber musician, Eunice won second prize and the Beethoven prize in the Pasadena Chamber Music Competition in 2018. She was also a part of the Ed and Mari Edelman Chamber Music Institute at the Colburn Community School of Performing Arts as the Colburn Honors Trio. For the past two summers, Eunice has been attending the Aspen Music Festival and School in Aspen, Colorado.