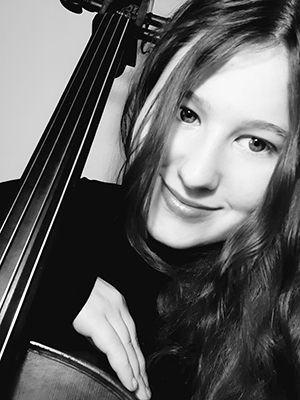 Elora Kares (cello), 16, from Shaker Heights, Ohio, recently joined the Cleveland Institute of Music (CIM) Pre-College Program as a scholarship recipient; admitted by audition into their Composition, Vocal Arts, and String Programs. Elora was born with an eidetic musical and audio graphic memory, active absolute pitch, and a rare combination of eight different types of synesthesia – making musical communication come very naturally to her. As a child, challenging life circumstances prevented access to private lessons or musical training, but Elora loved to sing and would not be deterred from music. Instead, she taught herself to improvise and compose through careful listening. In 2014, she entered the online Hal Leonard North American Vocal Art Song Competition. That first year, she made it to the semifinal round, and in 2020, she was selected as a finalist. In 2021, Elora performed as a vocal soloist with Cleveland’s baroque orchestra ‘Apollo’s Fire’, and she is currently a Soprano in CIM’s Advanced Chamber Choir.

Elora came late to the cello, renting her first instrument in 2018. A year later, she was accepted as a member of the University of Maine’s Baroque Chamber Ensemble and the Bangor Philharmonic Youth Orchestra. In addition, she had the opportunity to perform for the esteemed baroque cellist, Sarah Freiburg. Recently, Elora has participated in two prestigious, national programs: New World Symphony’s 2020 Virtual Inclusion Artist (VIA) Summer Academy, and the 2021 National Youth Orchestra program (NYO2) run by Carnegie Hall’s Weill Music Institute. As a fun project, during NYO, Elora convinced all NYO2 members to prank conductor Joseph Young with her original arrangement and transcription of Rick Astley’s ’Never Gonna Give You Up,’ which she seamlessly blended into Hindemith’s ‘Symphonic Metamorphosis’, creating an unexpected ‘Rickroll’. So far, this arrangement has been viewed over 376,000 times and received more than 117,000 ‘Likes’ on social media platforms.

Composition and writing are two additional passions, and Elora is currently working on an opera titled ‘The Sister’s Lament’ while also writing a book. The book conveys her unique perspective as one born with eight different types of Synesthesia. She is including visuals by painting several works by Mozart, demonstrating how her over-lapping colors, emotions, shapes, feelings, and phrase line imagery intertwine and converge. She hopes to highlight how uniquely individual our musical experiences are, while also offering a glimpse into her own private musical world.