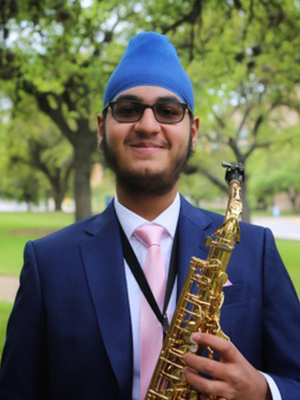 Ekdev performed on From the Top with the Quantum Quartet on Show 386 in Los Angeles, California in March 2020.

Ekdev Rajkitkul (saxophone), 17, is a senior at Hebron High School in Carrollton, Texas, studying classical saxophone with Mark Smith. Ekdev is currently the soprano saxophonist of the award-winning Quantum Quartet (having originally occupied the alto saxophonist role for 3 previous years). The quartet has been recognized nationwide, winning the silver medal at the 2019 Fischoff Chamber Music Competition and performing as guest artists in the 36th Annual Young Musicians Concert in Lincoln Center. Additionally, Ekdev is a member of the Hebron Wind Symphony and Varsity Marching Band, serving as a Band Officer and Saxophone Section Leader for the organizations. Outside of his ensemble pursuits, Ekdev is also an active soloist. He is a Texas All-State saxophonist, and has won first prize in both the Junior and Senior divisions of the UT Austin Saxophone Academy competition, as well as third place in the Houston Underground Solo Competition. He was also a featured soloist with the band at last year’s BOA Grand Nationals Marching Competition in Indianapolis. Ekdev most enjoys Sunday night rehearsals with his quartet, masterclass instruction with mentors and idols, and performances with the Hebron Marching Band. Outside of music, Ekdev likes exploring new places through the lens of his camera, cooking, basketball, and watching stand-up comedy, most notably the work of Hasan Minhaj and Trevor Noah.