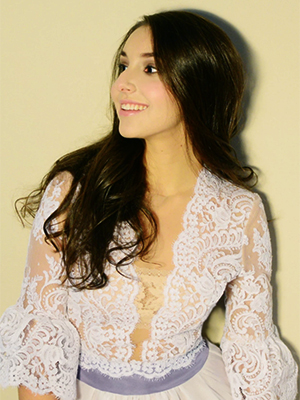 Daniela Liebman (piano), 19, was born in Guadalajara, Mexico and currently resides in Fort Worth, Texas. She is an international Yamaha artist and has performed with more than 25 orchestras on four continents. This season, Daniela makes her debuts with the San Angelo Symphony, the Wichita Symphony, the Adrian Symphony, Sequoia Symphony, and the Las Colinas Symphony. She recently appeared as soloist with the Flagstaff Symphony, and Hartford Symphony, and made return appearances with the Orquesta Filarmónica de Jalisco and the Ontario Philharmonic.

In both 2016 and 2017, Daniela was named one of the “40 Most Creative Mexicans in the World” by Forbes Mexico. In 2018, Daniela was again named one of Forbes Mexico’s “100 Most Creative and Powerful Women,” and was invited to the magazine’s reveal of its 2018 edition of Creativos Mexicanos, celebrating extraordinary Mexican leaders in the arts. She has been interviewed by Amy Poehler’s “Smart Girls,” is featured in GQ Mexico and Vanity Fair, and is the recipient of Mexico’s 2014 Nacional Premio de Juventud.

Committed to sharing her love of music with others, Daniela frequently participates in talkbacks with piano students of diverse ages and backgrounds. Outside of music, Daniela enjoys watching films, reading, biking, and trying different cuisines.

From the Top · Daniela Liebman, 19, piano, from Fort Worth, TX
Learn
Our Partners
DONATE NOW