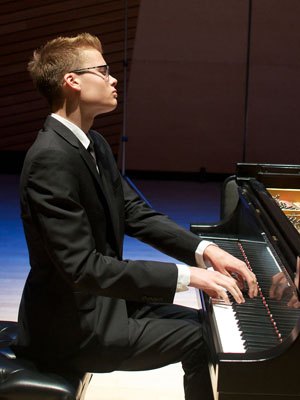 Colton Peltier (piano), 19, is from Hastings, Minnesota, but currently resides in New York City while he attends The Juilliard School. He started piano in a Suzuki program at the age of three, and had his first performance with an orchestra, the St. Paul Chamber Orchestra, when he was nine. This summer he is attending the Aspen Music Festival and School where he is studying with Veda Kaplinsky. He has appeared on From the Top three times, the first was in 2008 on Show 184 in Aspen, Colorado, then he returned in 2010 for Show 204 in Granville, Ohio, and played with the Aurelia Trio in 2010 on Show 219 in Saint Paul, Minnesota.