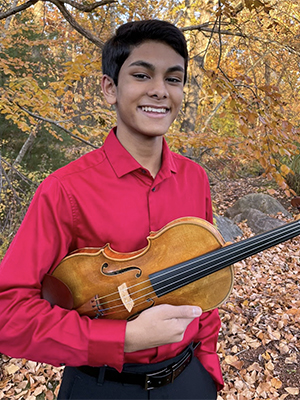 Ayaan Ahmad (violin), 16, is a Bangladeshi-American violinist from Sharon, Massachusetts. He began studying the violin at the age of four with Daniela Rubenstein. He later studied with the late Jan Mark Sloman, faculty at the Cleveland Institute of Music, and continues to study with Ryan Meehan of the Calidore String Quartet and Donald Weilerstein, faculty at the New England Conservatory. In 2015, Ayaan won 1st Prize at MMTA’s Bay State Competition. In November of 2020, he won 3rd prize in the senior division of the 2020 Sejong Virtual Music Competition, and the award for best interpretation of Korean music. In November of 2021, Ayaan won the 2nd prize in the same competition. In November of 2020, he won the Massachusetts round of the MTNA junior strings competition as well as the eastern division round, advancing him to the final national round. In 2022, Ayaan made his orchestral debut at the age of 15 with the Concord Orchestra, playing the Tchaikovsky violin concerto, and has gone on to perform with the New England Philharmonic as their Young Artist competition winner. In 2021, Ayaan was accepted into the Perlman Music Program, where he has spent the last two summers. There, he worked with esteemed teachers such as Li Lin and Catherine Cho, and performed and worked with world renowned violinist Itzhak Perlman. He has performed in masterclasses with Professor Paul Kantor, Professor Michael Ma, and Augustin Hadelich. In addition to his solo work, he has played with the Boston Youth Symphony Orchestra in venues such as Boston’s Symphony Hall, and has performed in Jordan Hall as member of a string quartet at the New England Conservatory. Outside of playing the violin, Ayaan enjoys playing the guitar, ultimate frisbee, and is passionate about math and history.