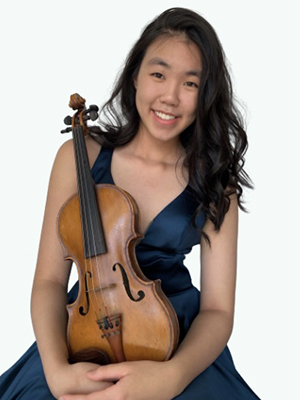 Ashley Tsai (violin), 16, is a Taiwanese-Canadian violinist studying with Henry Gronnier at the Colburn Music Academy in Los Angeles, California. Ashley made her first orchestral debut at the age of 13 and was the 2021 state winner of the Music Teacher’s National Association Competition in California. Other honors include being the first prize winner of the 2020 Rotary Calgary Concerto Competition and the Alberta String Association Competition. She has won prizes in many additional competitions, including the 2019 ENKOR International Music Competition and the 2019 Canadian Music Competition. Ashley has been awarded Provincial and National Gold Medals from Canada’s Royal Conservatory of Music, both for her practical and theory, history, and harmony exams. She is the recipient of several scholarships, including the Kohl Scholar Award at the Colburn Music Academy, an ARMTA Recital Award Scholarship, and the Harold Saklofske Scholarship. Ashley is an avid chamber musician and recently collaborated with pianist Jean-Yves Thibaudet. She has also participated in several international programs and summer music festivals, including the Curtis Mentor Network, and the Casalmaggiore International Music Festival in Italy, where she was awarded the 2019 Taras Gabora Prize for Outstanding Performances. Outside of music, Ashley enjoys jogging, reading, and hiking.