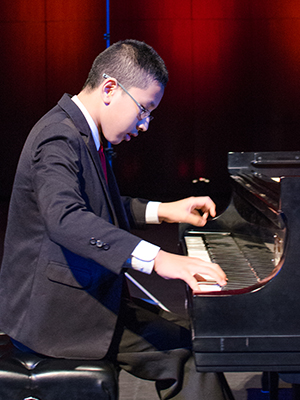 Nio was awarded the National Gold Medal from The Royal Conservatory for scoring the top mark in the United States on their 2017 Level 10 Piano Exam! This is Nio’s second National Gold Medal after previously winning it for his 2015 Level 9 Piano Exam. Nio also recently won 1st prize at Texas State University’s Young Artist Piano Competition and 2nd prize at the Baylor/Waco Piano Concerto Competition.

Antonio “Nio” Ajero (piano), 12, is from Nacogdoches, TX where he is in the 7th grade at Mike Moses Middle School. He currently studies in the Music Preparatory Division of Stephen F. Austin State University where he is in the studio of Linda Parr. His favorite musical experience was when he won the 2017 Baylor/Waco Solo Piano Competition. Outside of music, Nio enjoys Taekwondo, MathCounts, and cooking.