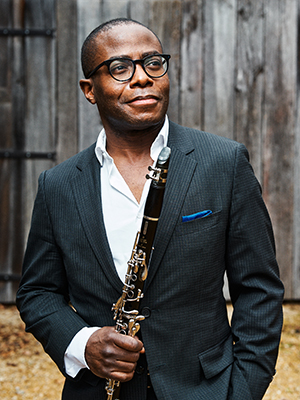 Anthony McGill joins From the Top as a Guest Artist on Show 408.

Hailed for his “trademark brilliance, penetrating sound and rich character” (New York Times), clarinetist Anthony McGill enjoys a dynamic international solo and chamber music career and is principal clarinet of the New York Philharmonic—the first African-American principal player in the organization’s history. He is the recipient of the 2020 Avery Fisher Prize, one of classical music’s most significant awards.

He serves on the faculty of The Juilliard School and is the Artistic Director for Juilliard’s Music Advancement Program. He holds the William R. and Hyunah Yu Brody Distinguished Chair at the Curtis Institute of Music. In 2020, his #TakeTwoKnees campaign protesting the death of George Floyd and historic racial injustice went viral.