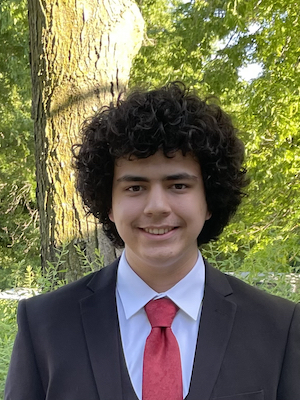 Aleo Esparza (percussion), 18, is a Mexican-American percussionist from Chicago, Illinois, where he is a senior at the Francis W Parker School. He has been a fellow in the Chicago Musical Pathways Initiative since 2019, and studies classical percussion at Merit School of Music with Brandon Podjasek. As a student at Merit, Aleo plays in the Philharmonic Orchestra as well as the percussion chamber group Sticks and Stones. Aleo is an active member of the Chicago Youth Symphony Orchestra (CYSO), serving as the Principal Percussionist, playing in the CYSO Percussion Quintet, and also performing as the Timpanist of the CYSO Classical Orchestral Repertory Ensemble (CORE). Aleo was named a 2021 Youth Artist by the Network for Diversity in Concert Percussion. That same year, he performed in the ILMEA (Illinois Music Education Association) District 1 Orchestra and would later be chosen for the ILMEA Honors All-State Band for a performance in January 2022, in Peoria, Illinois. At the age of 17, Aleo was awarded the opportunity to study with the esteemed Denis Petrunin through the Curtis Mentor Network. Later that same year, Aleo participated in the Chicago Youth in Music Festival where he performed in the Festival Symphony Orchestra at the National Pathways Summit.

With the support of the Chicago Musical Pathways Initiative, Aleo has had the wonderful opportunity to attend Interlochen Arts Camp twice – once in 2019, and then again in 2021, where he was selected to play in the World Youth Wind Symphony. This past summer, he attended the Brevard Music Center Summer Festival in North Carolina where he studied with Leonardo Soto, Gwendolyn Dease, Jeremy Epp, and Steve Merrill, and had the opportunity to play as a member of the Brevard Symphonic Winds and the Brevard Concert Orchestra.

Receiving the Award will support Aleo in purchasing the percussion instruments and mallets he will need for college and in his professional career. The scholarship funds will also aid in covering upcoming college audition travel costs.