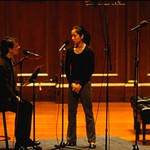 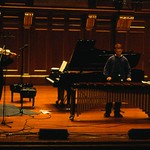 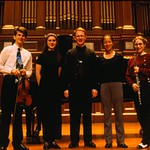 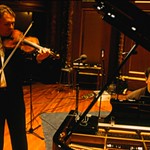 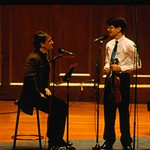 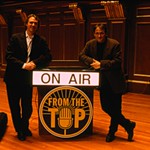 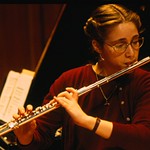 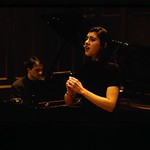 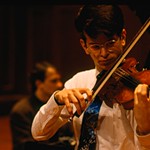 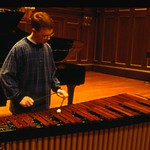 From New England Conservatory’s Jordan Hall in Boston, fiddler extraordinaire Mark O’Connor joins host Christopher O’Riley and five fantastic young musicians in our pilot episode of From the Top. Among the highlights, you’ll hear a beautiful piece of Japanese folk music played on marimba, a four-hand piano piece performed by Christopher O’Riley and a 16-year-old from Nebraska, and a Gershwin prelude played by a 15-year-old violinist from Indiana. Also, special guest Mark O’Connor plays one of his own compositions and discusses and the value of improvisation.

Violinist William Harvey’s musical life started very, very young. “My mother introduced me to my first violin teacher when I was three weeks old,” he explains. “I guess she just figured I was heading in that direction!”

William was the ripe old age of three when he actually started taking lessons. These days, the 15-year-old from Indianapolis, Indiana, composes music in addition to playing.

William performs a prelude by George Gershwin, arranged for violin and piano by Jascha Heifetz, with Christopher O’Riley at the piano, and also shows off a bit of one of his own compositions, his Solo Sonata for Violin.

Soprano Elizabeth Shapiro from Lexington, Massachusetts, made her vocal debut at the age of four and a half, belting out songs from the musical Annie. She began taking regular voice lessons four years ago, and now classical music has become her first love.

“There’s something I can express when I sing that I can’t express otherwise,” says Elizabeth. “It’s wonderful to be able to produce such incredible music and connect with people.”

In addition to singing, Elizabeth enjoys languages. She has studied French for nine years, Japanese for four, and is currently learning to speak Italian. She also enjoys acting and writing, and was recently awarded second place in the National History Day competition for her monologue on Jewish immigration in Chelsea, Massachusetts.

On her application for From the Top, she wrote that if she were no longer involved with music she would “learn to dance, become fluent in the tango, and travel to Argentina to dance with attractive Latin men.” She’d also like to take swing-dancing lessons and become “queen of the clubs on Saturday night.”

Sara performs the scherzo from Robert Muczynski’s Sonata for Flute and Piano, accompanied by Christopher O’Riley, and also shows off her piccolo playing with a few bars of Sousa’s Stars and Stripes March with Mark O’Connor on fiddle.

Special guest Mark O’Connor takes the stage with pianist Christopher O’Riley to perform the Gigue from his Fiddle Sonata, a piece commissioned by the Library of Congress last year.

A seven-time national fiddling champion, Mark O’Connor was voted “Musician of the Year” by the Country Music Association for six consecutive years, and his Appalachia Waltz with Yo-Yo Ma and Edgar Meyer was #1 on the Billboard Classical Chart for 16 weeks. He describes his latest work as an effort to meld classical and fiddling traditions to create a new American string sound.

Improvisation is a trademark of Mark’s musical style. In fact, in the piece he and Chris play together, one section of the sheet music is marked with notes that the violin must improvise for a few bars.

“It’s always tricky, but I put that into the music score so people will feel that its OK to improvise a little bit here and there,” he says. “Musicians shouldn’t be scared of improvisation.”

16-year-old Pete Slotnick’s musical life started in the fourth grade when he joined school band. His band teacher encouraged all the percussionists learn both drums and a mallet instrument. These days, Pete, who hails from Penfield, New York, plays a wide variety of percussion instruments.

Pete will probably always be remembered for his performance in his school’s eighth grade talent show, when he took to the stage in a bumblebee costume and played Flight of the Bumblebee on xylophone.

On From the Top, Pete shows off his marimba skills, playing Fantasy on Japanese Wood Prints by Alan Hovhaness with Christopher O’Riley at the piano. He and special guest Mark O’Connor also play a bit of Flight of the Bumblebee together.

Pianist Becky Lu was born in China, moved to Ohio when she was eight, and now lives in Lincoln, Nebraska. When she first moved to Nebraska, she had a hard time finding a piano teacher, so she took lessons over speakerphone with her the teacher she had in Ohio. Eventually she found a wonderful teacher closer to home, Dr. Paul Barnes from the University of Nebraska.

Now 16-years-old, Becky is an accomplished pianist, having won a statewide piano championship last year. She is also in advanced placement classes at school, and loves to sing, dance and act. With so much going on, she sometimes feels like she’s going to explode!

“There’s so much homework and practicing to accomplish,” she explains, “so I just have to keep everything in perspective and try not to overdo it. With all the expectations to do well, I can get really frustrated, but other times it just motivates me to do better.”

Becky performs Chopin’s Etude Opus 10 No.4, and then collaborates with host Christopher O’Riley on a four-hand piece from “12 Pieces for Large and Small Children” by Robert Schumann.