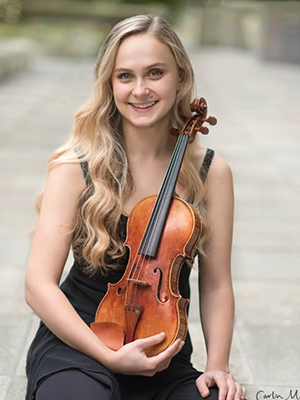 Yvette Kraft (violin), 18, lives in San Francisco, California, where she is first-year student at San Francisco Conservatory of Music studying under Simon James. Winner of the 2021 King FM Young Artist Award, Yvette has competed and performed nationally and internationally. After distinguishing herself at the International Louis Spohr Competition in Germany, she went on to win second prize at the 2020 Grumiaux International Violin Competition in Belgium. She was an MTNA National Finalist, received the Festival Medal at the Seattle Young Artists Music Festival, and has won several local competitions, including the Bainbridge Symphony Orchestra Concerto Competition. She made her solo debut with the Spokane Symphony Orchestra at age eleven and has gone on to perform with the Seattle Symphony, the Washington/Idaho Symphony, Interlochen Orchestra, and the Philharmonia Northwest Orchestra. She collaborates with the Music to Save Humanity Mentorship and Outreach Program to bring music and mentorship to the underprivileged. Outside of music, Yvette enjoys baking vegan desserts, reading 19th century Russian literature, and playing with her Yorkiepoo puppy, Rimsky.