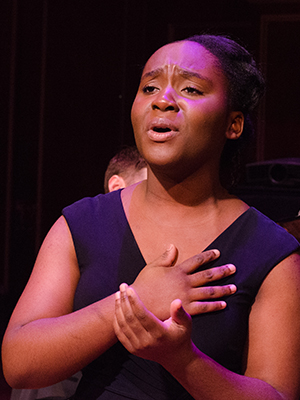 Wooldjina Present (soprano), 18, is a native of Miami, Florida and is a senior at New World School of the Arts, under the tutelage of Dr. Jennifer Tipton. She is a recipient of From the Top’s Jack Kent Cooke Young Artist Award. During the summer of 2019, Wooldjina attended Washington National Opera’s Opera Institute and ArtsBridge Summer ArtSong to develop her classical vocal skills within the art song and operatic repertoire. These programs have allowed her to sing in masterclasses for Denyce Graves, Harolyn Blackwell, Julie Jordan and Nathan Gunn, Brian Zeger, among others. Woodjina has won several Musical Theatre, Art Song, and Duet categories at the Florida Federation of Music Clubs during since 2017. She was awarded the “Most Outstanding Female Voice” award in the spring of 2019. She was named a finalist and “Broadway Bound” recipient at the Schmidt Vocal Competition in 2019 and was awarded “Encouragement Award” the previous year. Wooldjina is the 2019 High School Division winner of the Classical Singer Online Summer Competition. Additionally, she has received scholarships from Take Stock in Children Miami/Big Brother Big Sister Foundation, Schmidt Vocal Competition, Schmidt Vocal Institute, Washington National Opera’s Opera Institute, ArtsBridge Summer ArtSong, and New World School of the Arts.