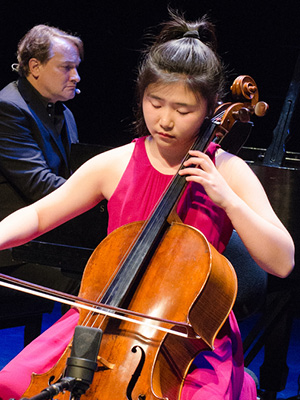 Woojin Nam performed on Show 352 in Zellerbach Auditorium in Berkeley, California on March 2, 2018.

Woojin Nam (cello), 17, was born in Suwon, South Korea and raised in San Ramon, California, where she is currently a senior at Dougherty Valley High School. A student of Jonathan Koh at the California Music Preparatory Academy, she has won awards in numerous competitions including the VOCE competition, Classic Alive Young Artists, and American Protégé International Concerto Competition, and has participated in Music@Menlo. Woojin’s favorite musical experience was attending the Meadowmount School of Music in 2017, where she says she “learned so much from teachers and peers.” She is most proud of having started a volunteer group, which creates and performs a musical story time in local libraries throughout Contra Costa County. In her spare time, Woojin loves listening to music of all kinds and hanging out with friends.