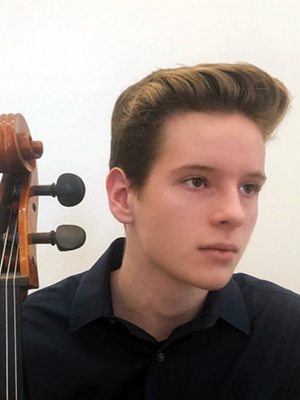 Vincent’s appearance on From the Top is sponsored by Nancy and Richard Lubin.

Vincent Garcia-Hettinger (cello), 16, hails from San Antonio, Texas, and attends Brandeis High School. He is a student of Ken Freudigman, Principal Cellist of the San Antonio Symphony. As the winner of the Youth Orchestras of San Antonio Concerto Competition, Vincent made his solo debut with the San Antonio Symphony in May 2019, performing the Saint-Saëns Cello Concerto. He has also been a featured soloist with the San Antonio Sinfonietta, performing the Boccherini Cello Concerto in B flat major. In the fall of 2020, Vincent was selected as the winner of the Ann Arbor Symphony Young Artist Competition, and has twice been named a Junior Division Semi-Finalist for the Sphinx Competition. Vincent was awarded a scholarship to attend the 2019 Sphinx Performance Academy at Juilliard, and in addition, was awarded a 2019 Sphinx MPower Artist Grant. He was also one of only 12 recipients of the 2020 Texas Commission on the Arts Young Masters Award. An avid chamber musician as well as a soloist, Vincent has performed with his piano trio and in string quartet for recitals, masterclasses, and pre-concert lectures. He enjoys volunteering with organizations such as Hearts Need Art, a non-profit group that works to provide art and music to adult cancer patients. Vincent plans to pursue a career in music and hopes to be a mentor for young musicians. Outside of music, Vincent is an avid runner and just completed his second half marathon.