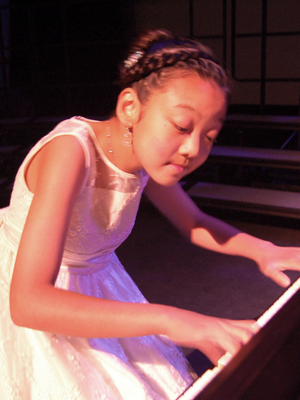 In addition to receiving the Jack Kent Cooke Young Artist Award alongside her From the Top appearance, Victoria also received the Cooke Foundation’s 2011 Young Scholars Award.

Victoria Young (piano), age 11, resides in Henderson, Nevada and has been taking piano lessons with Mrs. Damaris Alvarez at the Nevada School of the Arts since age 5. She performed as a soloist with the Nevada Chamber Symphony and Las Vegas Youth Camerata Orchestra. Victoria has performed at Carnegie Hall and was selected to compete in the 2010 Tureck International Bach Competition in New York. Other passions that fill her time include drawing, painting, reading, biking, and swimming.

From the Top · Victoria Young, Piano