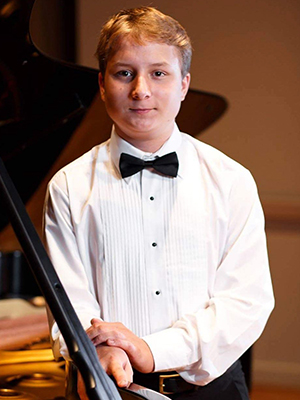 Victor Shlyakhtenko (piano), 18, hails from Los Angeles, California and has been studying piano since the age of five.  Victor has appeared with several orchestras in the US, soloed on the stages of Walt Disney Concert Hall, Carnegie Hall, and the Leipzig Gewandhaus, and received first prizes in the Los Angeles International Liszt Competition, Music Center’s Spotlight Competition, Kathryn Gawartin Chopin Competition, and the Glendale Piano Competition.  He is a four-year recipient of the US National Chopin Foundation scholarship.  In addition to being a pianist, Victor is an aspiring conductor and plans to double major in piano and orchestral conducting in college.  He is deeply grateful to his current and former piano teachers, Stanislav Ioudenitch and Fabio Bidini; and to his conducting teacher Maxim Eshkenazy.  Outside of music, Victor’s interests include studying foreign languages, aviation, and marine biology.