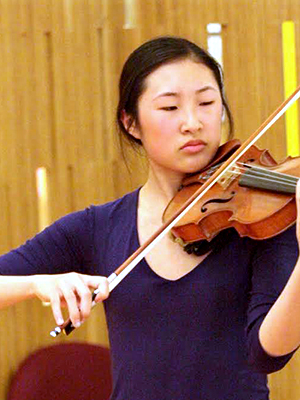 TALIA KEE, 16, is a junior at Noble and Greenough School and has been playing violin since she was three.  She currently studies with New England Conservatory (NEC) and Boston University faculty member Jin Kyung Joen.  Talia is currently a member of NEC’s Youth Philharmonic Orchestra (YPO) with David Loebel.  Talia has been a member of YPO for three seasons, having toured Iceland (2015), with an upcoming summer tour of Norway. Talia is also an avid member of her school’s orchestra.  She toured with the Nobles orchestra to Bermuda (summer of ’15) and Montreal (summer of ’16).  Talia has placed in multiple competitions, such as first place in the 2015 MMTA Bay State Contest and second place in the 2014 MSO Concerto Competition.  Most recently, she placed first in the 2015-2016 winter season American Fine Arts Festival, and made her Carnegie Hall debut in September.  In the summer, Talia has attended both Junior and Senior Greenwood Music Camp for a total of five years.  This past summer, Talia spent seven weeks learning computer science at Twitter Boston.  In addition to coding, she enjoys playing squash, going to the beach, and traveling around the world.

Talia is a member of the Center for Development of Arts Leaders (CDAL) in Boston.
Class Year: 2017