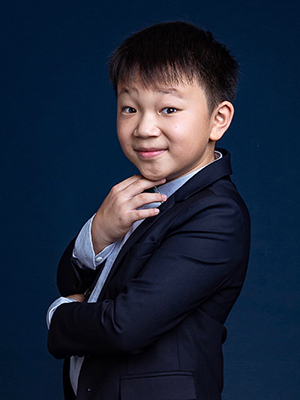 Taige performed on Show 400, recorded at The Colburn School in Los Angeles, California.

Taige Wang (piano), 10, is from Irvine, California, and in the fifth grade at Tarbut V’Torah Community Day School. He studies piano with Ariel Yang at Opus 119 The School of Music. He also studies composition with Vera Ivanova. Taige already has many musical accomplishments under his belt. Most recently, he received 1st place in the Los Angeles Liszt International Competition and two Best Performance Awards of Concert Etude and Hungarian Rhapsody, winning amongst all age categories.

His first public performance was at the age of 4, and at the age of 5 he was invited by Steinway Artist Dr. Weihui Mao to perform in a live show broadcast on China Central Television. At the age of 7, he gave his solo concert by invitation of Steinway & Son, Dalian, CN. In 2020, Steinway & Sons shared Taige’s performance of Liszt’s Gnomenreigen on their global social media, and it received 87,000 views by the end of the year. Outside of music, Taige enjoys math and is an expert at solving the Rubik’s Cube.