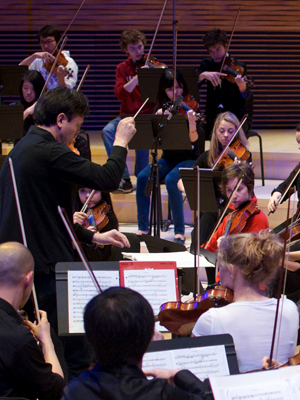 The Stanford Symphony Orchestra appeared on Show 279, recorded in November 2013.

The Stanford Symphony Orchestra (SSO) is the largest on-campus student music organization, supported by the Music Department and the Associated Students of Stanford University (ASSU). Every year, the SSO attracts a diverse membership ranging from local computer scientists and aeronautics graduate students to English majors. It presents approximately six concert programs each season and winners of Stanford Symphony Orchestra’s annual Concerto Competition are regularly featured as guest soloists.  In addition, the orchestra often collaborates world-renowned artists, on-campus choral groups, and the Stanford Wind Ensemble. Under the direction of Maestro Cai, the orchestra has toured to Australia and New Zealand in 2005 and China in 2008 as part of Beijing Olympic Cultural Festival. In January 2013, the SSO moved into its new home on campus, the Bing Concert Hall. In celebration of its new home, the SSO presented “The Beethoven Project” that season, featuring performances of all nine of Beethoven’s symphonies and all five of his piano concertos, with Van Cliburn gold medalist Jon Nakamatsu. The Beethoven Project culminated with a tour of central Europe, dubbed “In Beethoven’s Footsteps”, with the SSO performing across Germany, Czech Republic, and Austria in the sites and cities most relevant to Beethoven.