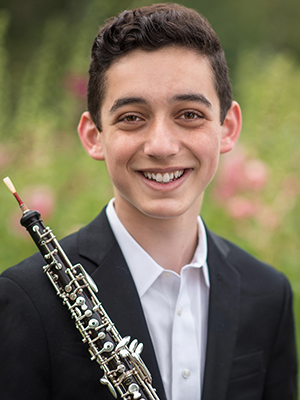 Spencer Rubin (oboe), 16, hails from Woodbury, New York, and is in his junior year at Syosset High School. He is a music student at The Juilliard School Pre-College Division where he studies with Elaine Douvas and Yousun Chung. He has attended Aspen Music Festival, Hidden Valley Music Festival, Juilliard Summer Winds Festival, Boston University Tanglewood Institute’s Young Artists Orchestra, and the Interlochen Arts Camp. Spencer was named a 2020 YoungArts Finalist and attended YoungArts week in Miami, Florida. Spencer has earned numerous awards in international competitions resulting in performances at Carnegie Hall’s Weill Recital Hall, Merkin Recital Hall, and an invitation to perform at London’s Royal Albert Hall. As a soloist, Spencer has performed with the New York Chamber Orchestra and will be performing with the Queensboro Symphony Orchestra and The Island Symphony Orchestra during their upcoming seasons. As a chamber musician, he was a grand prize winner of the National League of Performing Arts Competition and was a two-time winner of the Chamber Music Society of Lincoln Center’s youth competition. Outside of music, Spencer enjoys oil painting, sculpting, hiking, and traveling.