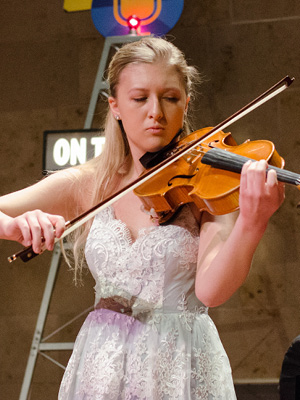 Sophia will perform on Show 353 at the San Francisco Conservatory of Music on March 4, 2018.

Sophia Ines Valenti (viola), 15, lives in Santa Rosa, California and is a freshman at Connections Academy. She studies at the San Francisco Conservatory of Music Pre College Division with Dimitri Murrath. Sophia won third place in the junior division of the 2018 Sphinx Competition for Black and Latino String Players. Her favorite musical experience has been performing as a soloist with the Santa Rosa Symphony Youth Orchestra. In her spare time, Sophia enjoys reading, watching horror movies, and spending time with family and friends.

Sophia also performed on NPR’s From the Top with Host Christopher O’Riley Show 319, at the age of 13, with Gianfranco Baltazar, Jacob Reed, and Mai Matsumoto.