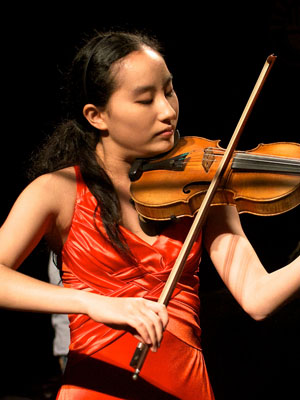 Watch Sein play in the Heifetz 2017 Stars of Tomorrow!

In 2015, Sein became the 2015 Junior Peace and Music Ambassador by the Harmony for Peace Foundation!

Sein An, (violin), 19, is originally from Maple Glen, Pennsylvania, and is now studying in the Juilliard School/Columbia University joint degree program. She is a past recipient of From the Top’s Jack Kent Cooke Young Artist Award and appeared twice on From the Top in high school.

Sein An, (violin), 18, is from Maple Glen, Pennsylvania, and attends Upper Dublin High School. She is a recipient of From the Top’s Jack Kent Cooke Young Artist Award when she appeared on Show 277 in Bowling Green, Ohio. Sein An is currently studying with Robert DePasquale, former Associate Principal Second Violinist of the Philadelphia Orchestra. Sein was a finalist for the 2015 National YoungArts Foundation and was awarded the Grand Prize in the 16th International Violin Competition, “Remember Enescu.” Outside of music she enjoys reading, swimming, and math.