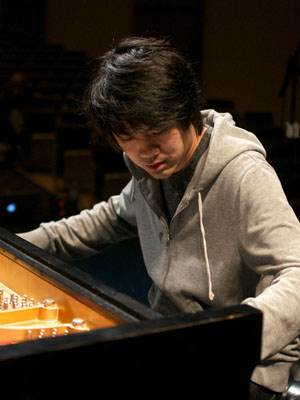 In 2015, Sean won the Annenberg Fellowship!

Sean Chen (piano), 25, originally appeared on From the Top in 2006 on Show 134 in Stanford, California. He is the 2013 Van Cliburn International Piano Competition Crystal Award Winner and second-prize winner at the 2011 Seoul International Music Competition and Christel DeHaan Classical Fellow of the American Pianists Association. Sean Chen has performed with several orchestras, including the Indianapolis Chamber, Juilliard, New West Symphony, and Suwon Philharmonic. He has presented solo recitals in Albuquerque, Indianapolis, Los Angeles, Miami, New York, and Taipei, among other cities. Born in Florida, Mr. Chen grew up in Oak Park, California and now resides in New Haven, Connecticut, where he is pursuing his artist diploma at the Yale School of Music. When not at the piano, he enjoys tinkering with computers and composing.

Show 280, Wingate, NC
"The Sacrificial Dance" from "The Rite of Spring" by Igor Stravinsky