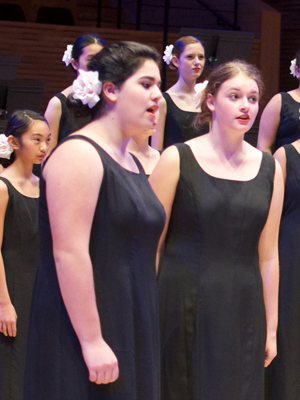 The San Francisco Girls Chorus appeared on Show 279, recorded in recorded in November 2013.

San Francisco Girls Chorus, founded in 1978, is a regional center for music education and performance for girls and young women, ages 5Ð18. Each year 400 singers from all nine Bay Area counties participate in this internationally recognized program, deemed Òa model in the country for training girls voices by the California Arts Council. Annually, its dedicated young artists present season concerts, tour nationally or internationally, and appear with respected partner organizations, including San Francisco Symphony and San Francisco Opera. SFGC’s 30th Anniversary season, 2008-2009, culminated in a performance at President Barack ObamaÕs swearing-in ceremony, and a debut concert at Alice Tully Hall at New YorkÕs Lincoln Center. The Girls Chorus has won many honors, including, the prestigious ÒMargaret Hillis AwardÓ in 2001, given annually by Chorus America to a chorus that demonstrates artistic excellence, a strong organizational structure, and a commitment to education. Other awards include three ASCAP awards for Adventurous Programming in 2001, 2004 and 2011, and five Grammy¨ awards.

Show 279, Stanford, CA
"Slav'sya" (Be Glorious) from Six Choruses, Op. 15, by Sergei Rachmaninoff and "The Pirate of Penance" by Joni Mitchell